A Platform For Change

Despite growing scientific evidence that brain growth and development occur most rapidly during the first five years of life, our society’s investment in children’s education and care is lowest during those critical early years. Comprehensive learning programs for very young children, especially those growing up in families facing enormous odds, remain scarce.

Like Educare schools across the country, both Educare schools in Omaha also serve as platforms for change, reaching beyond Educare’s four walls to boost the quality and effectiveness of programming for children in other settings while also serving as a “showroom for quality” in which lawmakers, business leaders and others can learn about the wisdom of investing in the first five years.

component of the Building Bright Futures initiative, the Buffett Early Childhood Institute at the University of Nebraska, and many others to drive change on the state and local level.

In addition, Educare Omaha partners with the Alliance for Early Success and the First Five Years Fund to drive change across the country and on the federal level.

The Ripple Effect in Nebraska

How do you extend Educare-levels of quality to all vulnerable children and families across a state? First, we’re part of a growing statewide network of Educare schools, with our two in Omaha plus the new Educare Lincoln. What’s more, Educare Winnebago is under construction, scheduled to open in early 2014 – and several communities across Nebraska have expressed an interest in developing an Educare school. Second, Educare Omaha collaborates with First Five Nebraska, the new Buffett Early Childhood Institute and other partners to extend high quality to more children growing up in families facing tough odds. 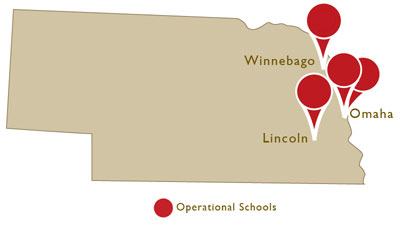